UFC on FX 7: Belfort vs. Bisping Weigh-Ins LIVE In Less Than An Hour [VIDEO] 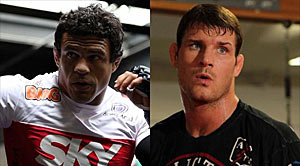 We’re a day away from the first MMA event of the year held by the UFC that features middleweights Vitor Belfort and Michael Bisping as the main fight on the UFC on FX 7 card, but the weigh-ins with all 22 fighters needs to be settled before the big showdown tomorrow night at the Ibirapuera Arena in São Paulo, Brazil.

The event will also hold the first UFC fight for Daniel Sarafian, who was the middleweight finalist on the first season of The Ultimate Fighter: Brazil. Sarafian was injured before the championship fight with Cezar Ferreira, and went on to win the show.