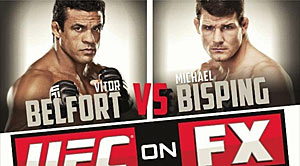 Michael Bisping’s title hopes all come down to this fight. If the brash Brit can take care of business on Saturday and defeat Vitor Belfort, there should be no complaints if he is next in line for the middleweight strap. There may be more intriguing fights for Anderson Silva (Chris Weidman, Hector Lombard) but Bisping has been fighting the division’s best since 2006 and at 33 years old, he deserves his shot.

If Vitor Belfort can catch Michael Bisping with his notoriously fast-hands in the first couple of rounds, the Brazilian will certainly emerge victorious in front of his home crowd of Brazil. However Belfort’s hand-speed is not what it once was and he has struggled against wrestlers before (Tito Ortiz, Anthony Johnson).

Bisping’s ever-improving ground-game and his well-rounded fight game should give him a nod in this main event but he certainly needs to stay away from Belfort’s shots and tire out the Brazilian by pushing the pace.

Daniel Sarafian will be making his promotional debut against The Ultimate Fighter alumni C.B. Dollaway. The Brazilian-Armenian Sarafian is undefeated in his last four fights and has the ability to slap on lethal submissions early in the first round.

However Dollaway’s strength and wrestling could prove the difference here. Expect a slower paced and frustrating fight on the ground for Sarafian if Dollaway gets the nod.

Gabriel Gonzaga makes his long-awaited return to the Octagon and takes on the always-durable Ben Rothwell. This fight is more or less a flip of a coin – both fighters have good chins, they are both tough and they should be both expecting to stand with one another. Rothwell’s powerful wrestling and Gonzaga’s black-belt jiu-jitsu will probably cancel out each other in this heavyweight scrap.

With his boxing getting better every fight, Thiago Tavares looks eerily similar to a young Vitor Belfort than emerged out of the UFC in 1997. Tavares should mix things up and use a bit of wrestling, muay-thai and jiu-jitsu to keep Khabib Nurmagomedov guessing his opponent’s gameplan but the M-1 veteran canceled out Kamal Shalorus and Gleison Tibau’s wrestling in his previous fights. Nurmagomedov should go 3-0 in his UFC career Saturday night.