UFC on FX 7: Intense Stare Down Between Belfort And Bisping At Presser [VIDEO + AUDIO] 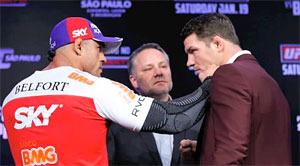 UFC on FX: Belfort vs. Bisping is the 7th mixed martial arts event to be held by the UFC on FX, which will be broadcasted for FREE on the network this Saturday night and the event will take place at the Ibirapuera Arena in São Paulo, Brazil.

As you may already know, Michael Bisping always likes to put on a show for the crowd and expose his ruthless character to his opponent when it’s game time. Well, that time has arrived between the two middleweights during the pre-fight presser stare down, in which Vitor Belfort and Bisping got a little too close for comfort.

Afterwards, Bisping blasts Vitor for “roid rage” during a conversation and MMA Fighting has captured it all for us in the video right below. (Warning: Some language is NSFW).