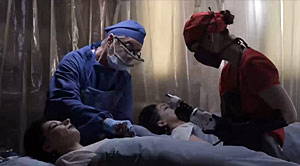 The Twisted Twins are back again to introduce another never-before-seen clip from American Mary, a Canadian horror film, which begins playing in theaters internationally this month. That means a number of European countries, including the UK and Germany will see a limited release of American Mary.

However, U.S. fans will have to wait a few more months to see it since the U.S. distribution rights were recently acquired by XLrator Media. This multi-platform releasing company announced that it has plans to release American Mary on its Screamfest label later this year.

“Based on the extraordinary audience response at this year’s festival, we knew we had to have this film on our Screamfest imprint with XLrator. Jen and Sylvia Soska are incredibly talented directors. We are so thrilled to bring this film to genre fans all over the U.S.,” said Screamfest co-founder and festival director Rachel Belofsky.

This is the second clip released thus far that is part of an ongoing push to promote the film for fans, and to help gain new ones. If you want to know more about American Mary, you can read the synopsis right below.

American Mary tells the story of a medical student named Mary (Katharine Isabelle) who grows increasingly broke and disenchanted with medical school and the established doctors she once idolized. The allure of easy money sends a desperate Mary through the messy world of underground surgeries which leaves more marks on her than the so-called freakish clientele.