Will Dead Rising 3 Come To Life? 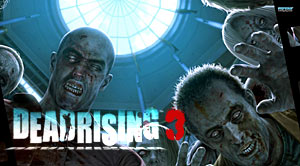 It isn’t a surprise that we love zombies here on Yell! Magazine. In fact we love them so much that we would give up our soul to turn into one. Actually, wait a minute, that is not entirely true since most of you are probably well equipped to survive a zombie apocalypse, and given your skills the lifespan of a zombie wouldn’t be too long.

Anyhow, because we are passionate in bringing you the latest news on anything zombie-related, it would be a shame if we avoided any sort of rumor on Dead Rising 3, if we came across one.

Well, according to Gamespot, there is additional evidence that Dead Rising 3 does exist based on a small mention of the zombie-themed game on a LinkedIn resume of a rigging supervisor at Blur Studio. It appears that no further information was included on the profile and Capcom told Gamespot the following.

“Capcom has made no announcements regarding any new Dead Rising titles.”

Even if no official announcement has been made by the publisher yet, it is still very likely that Dead Rising 3 is in development, but just not under our nose. I guess it will be a matter of time before they release actual information on the title, if the detail above is in fact true.