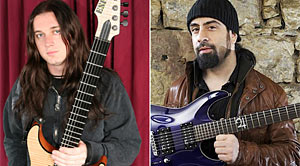 After 12 years with the band, and on the heels of the Grammy nomination for Best Rock/Metal Performance for the track “I’m Alive” from Worship Music, it will no doubt weigh heavily on the hearts of Anthrax fans that Guitarist Rob Caggiano has decided to leave. The tough decision seems to have come from a good place, and not one of ill will from either party. As Caggiano said in his official statement, he would like to focus on the production and studio work aspects of the industry. You can catch Caggiano’s full statement after the jump.

As for Anthrax’ position on the decision, the band has issued a brief statement:

“Rob has been an integral part of Anthrax for so many years, as our lead guitarist, in a production capacity, but most of all, as our close friend. His contributions to the band have been enormous. While we are sad that he is leaving, we wish him nothing but great success going forward, and hope to share the stage with him again sometime down the road.”

Given Antrhax’ recent heavy metal renaissance and reunification with Joey Belladonna, it sucks that a longtime member has to leave. While an official replacement guitarist has yet to be announced, Anthrax has announced that they’ve hired a Jon Donais of Shadows Fall to fill in for Caggiano.

Speaking of touring, the Anthrax tour is called the Metal Alliance Tour and gets underway this spring in North America. Joining them on tour is Exodus, Municipal Waste, High On Fire, and Holy Grail. Anthrax will perform their classic 1987 album Among the Living in its entirety.