Aliens: Colonial Marines Is One Month Away For Release – Check Out This “Alien Hive” Teaser [VIDEO] 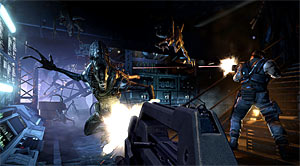 That’s right my friends! Aliens: Colonial Marines, the highly anticipated FPS developed by Gearbox Software is exactly one month away for release on the Xbox 360, PlayStation 3, and PC.

Since this game has been described as a true sequel to James Cameron’s film, we honestly can wait to experience this bad ass adaptation on February 12, 2013. Over the past few months we have been covering many updates on Aliens: Colonial Marines and it’s near bloody time to play it. But before the big launch day we have another trailer for you to check out, which teases the Alien hive, “a dark, imposing place of fear you won’t soon forget.”

Watch it and let us know if you plan on picking up this game in the comment section below.