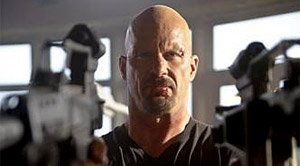 The Package, directed by Jesse V. Johnson, comes to Blu-ray next month. In the lead-up to its release, we’re currently being teased with the Bowling Alley clip, which shows Tommy Wick (Steve Austin) giving Luis (Patrick Sabongui) a shakedown. Yeah, we’ve all had minor fears of crushing our fingers between bowling balls, but this scene brings new meaning to gutter ball.

Unfortunately, Steve Austin is a train wreck of an actor. It’s painful to listen to him deliver his lines, yet I can’t look away. I just gotta know what cheese is going to fall out of his mouth next. A corpse on a stone cold slab in a morgue has more personality and charisma. Dolph Lundgren isn’t in the Bowling Alley scene, but if you’re familiar with his acting, you know he’s far from an Oscar-caliber actor. However, next to Stone Cold Steve Austin, Lundgren is a regular Juilliard thespian.

Still, even with Austin in the cast, the imagination that went into The Package (at least this scene) might make it a worthy viewing come February 19, 2013.

Let us know what you think of the Bowling Alley clip below.