30 Years Of NOFX – Get The Limited-Edition Collection 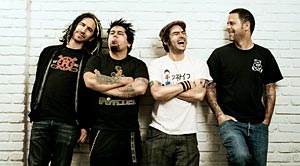 If you’re a NOFX fan, you don’t want to miss out on this.

Quintessential California punk band NOFX celebrate their monumental 30th anniversary by announcing the release of a limited edition deluxe LP collection of every studio album they have released, from 1988’s Liberal Animation through 2012’s Self-Entitled. On February 19, 2013, this limited-edition collection will become available, and as of January 3, it can be pre-order at: www.nofxboxset.com.

The must-have collection of only 2,500 pressings will include all of NOFX’ studio albums, as well as the 2xLP for the “7 Inch of the Month Club,” which has never been available before. Liberal Animation, S & M Airlines, Ribbed, White Trash, Two Heebs & A Bean, Punk In Drublic, Heavy Petting Zoo, So Long And Thanks For All The Shoes, Pump Up The Valuum, The Decline, War On Errorism, 7-Inch of the Month Club, Wolves in Wolves Clothing, Coaster, and Self-Entitled are packaged in a beautiful hardbound anniversary box and pressed on colored vinyl with exclusive colors available through both Fat Wreck Chords and Epitaph Records.

In addition, all box sets will include a life-size version of the band’s infamous stage banner and 500 LPs will be signed by the band. As a perfect gift for vinyl fans, collectors, and NOFX fanatics alike, the LP Box Set is limited-edition and will undoubtedly sell out fast.