Mimesis Is Horror Evolved – You Don’t Want To Miss This 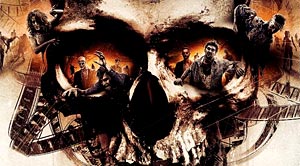 Perhaps it’s taking a page from the Pleasantville, Twilight Zone, Scream, and maybe Halloween: Resurrection, but one thing is sure: Mimesis is putting the horror genre on its head by turning the classic film Night of the Living Dead into a real-life nightmare. OK, that might be a bit of an exaggeration (zombies still don’t exist, unfortunately), but there’s no doubt that Mimesis is doing something awesome.

What Mimesis does is let you live an ultimate horror fantasy. How often have you watched a horror film and wished it could go on and on and were disappointed because the movie ended. Sucks, right? Wouldn’t you love it if those movies never had to end? Better yet, wouldn’t it be awesome if the movie wasn’t a movie at all?

On February 12, Mimesis will be released on Blu-ray. Starring genre favorites Courtney Gains (Children of the Corn, Back to the Future) and Sid Haig (Rob Zombie’s Halloween, The Devil’s Rejects, House of 1000 Corpses), with a special cameo by original Night of the Living Dead star Bill Hinzman and featuring a song from the multi-platinum selling band Insane Clown Posse, Mimesis is already on its way to becoming the next great cult horror film.

Mimesis has won over fans at festivals spanning the globe, including FesTerror in Barcelona; Fantastic Estepona inSpain, where it won awards for Best Director and Best Original Score; the Shock Stock Horror Convention in Ontario, Canada; CineQuest in San Jose; the Los Angeles Fear & Fantasy Film Festival, where it won Honorable Mention for Best Picture; awarded Best Screenplay at the La Samain du Cinema Fantastique in Nice, France, and most recently winning Best Feature Film at the 2012 LivingDead Film Festival.

In the film, a group of horror fans find themselves unwilling participants in a living nightmare that pays homage to a classic horror film. Seven complete strangers whose only common link is a love for classic-era horror films are invited to attend an exclusive “horror fan” party at a remote farm. But as the sun sets, these strangers soon find themselves within a real life version of the 1968 George Romero cult horror classic Night of the Living Dead!

This is a film not to be missed.