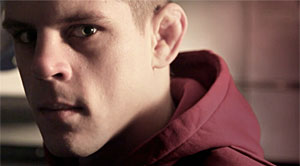 Dana’s first Vlog for UFC 155 introduces Nick “the tooth”, a long time friend of the UFC President. Back at UFC on Fox 5, Nick had a few (too many) drinks one night and talked himself into a grappling match inside the Octagon with Joe Lauzon, who ended up walking away with $6,000 in bonus money.

The details of the story was explained by Lauzon on MMASucka Radio last week:

“I got in a grappling match in the cage with Nick The Tooth. He’s actually a friend of Dana’s. It’s actually going to be in one of Dana’s video blogs coming up pretty quick here. Basically, the premise was that every time I submitted Nick, I got $1000 and if Nick could submit me then he got $2,500. So, I had three minutes to grapple with him and I banged out six submissions. So, I had a very good weekend.”

Joe Lauzon will officially face lightweight contender, Jim Miller, this Saturday night at the MGM Grand Garden Arena in Las Vegas, Nevada for UFC 155. This is the last big fight card of the year, so don’t miss out this weekend as former UFC Heavyweight champion, Cain Velasquez, will try to take the strap from Junior dos Santos.