Eli Roth’s Aftershock Looks Epic! This Is What You Get When “Hangover” Meets Horror [VIDEO] 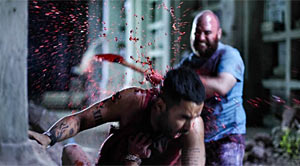 Good riddance the end of the world didn’t happen because the graphic images you’re about to see in Eli Roth’s Aftershock are quite terrifying, and one can only hope that the human nature isn’t evil as in this upcoming horror film directed by Nicolas Lopez.

The easiest way to describe Aftershock is just to picture the events that take place in Hangover, and twist them into a horror theme. Instead of three guys trying to find their best friend after a good party night, Aftershock brings three friends together after an earthquake hits paradise city. If you know Eli Roth then you can pretty much assume the shit that will go down in this film. Just have a quick look at the still below for another reminder.

Aftershock currently doesn’t have a specific release date set for theaters, but a big VOD push is reported to come in effect by The Weinstein Company, who picked up the film after it premiered at TIFF in September.

Expect more details to come shortly and in the meantime enjoy this first trailer for Aftershock.