Sony unveils Female Character in “The Last Of Us” 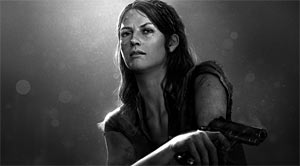 Sony’s prolific in-house developer, Naughty Dog, first announced last December their next video game franchise titled The Last Of Us, which has been confirmed for release on May 7, 2013 exclusively for the PlayStation 3. Today, we have new details about a female character in The Last Of Us named Tess, who has been described as a “pivotal character” in the game, and she will be the partner to Joel (main protagonist).

According to Gamespot, Tess lives in one of the last remaining quarantine zones of a city, who works in the black market under martial law, and also helps Joel to secure the contraband.

“Tess and Joel subscribe to the same dog-eat-dog philosophy,” Sony said on the official PlayStation blog. “They survive by being willing to do what others can’t or won’t. Her trust in and loyalty towards Joel runs deep. However, secretly, she questions whether Joel shares the same emotions that she feels for him.”

Lastly, Tess is voiced by actress Annie Wersching, who is known for playing the role of Renee Walker in 24. Wersching has also provided motion capture for the character.

The Last Of Us – Tess

Related Items: The Last of UsUncharted