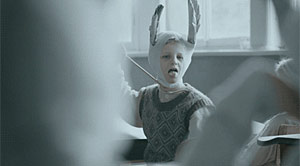 It’s not often that Rammstein releases a video worth watching… wait, yes it is. The latest offering from the German industrial band is “Mein Herz brennt” (My Heart Burns), which is actually a track from 2001’s Mutter. It might seem odd to revisit an older track, but it makes perfect sense if said track is included on your recently released greatest hits comp (in this case, entitled Made in Germany: 1995-2011) and it’s the only track that was never released as a single and never had an accompanying video.

So, Rammstein did the only right thing they could given the situation; they righted a wrong and released the song as a single to promote the upcoming DVD Videos 1995-2012 and made not just one but two videos (of two different versions) for “Mein Herz brennt.” Although the video for the second piano version of the track isn’t as involved as the explicit version, the music is hauntingly beautiful.

Considering some of Rammstein’s previous videos, it’s a little unclear as to why the explicit version of “Mein Herz brennt” is explicit. It actually doesn’t look too far removed from 2000’s The Cell, starring Jennifer Lopez. Given the news of the day, December 14, 2012, it’s a little disturbing to see a gun, a school, and children in a metal video — metal heads better be prepared for some backlash — but Rammstein can hardly be blamed for something they did prior to today.