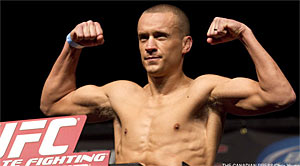 Canadian MMA fighter, Mark Hominick, announced his retirement via UFC on FUEL TV after an 11 year run in a professional career, including competing under the Zuffa, LLC banner. After knowing the life-changing problem Hominick had to deal with three months after UFC 129, such as the death of his coach Shawn Tompkins, who was also a longtime friend to the veteran. It’s hard not to be surprised by his announcement since we all know his fight drive inside the Octagon just hasn’t been the same after his loss against UFC Featherweight Champion, José Aldo.

“I truly got to live my passion and follow my dreams by competing in mixed martial arts, especially under the Zuffa banner, but UFC 154, that’s the last fight I’ll be in the octagon, as I’m retiring and looking to move on to the next phase of my career.”

Currently with four consecutive losses in the UFC, including the one at UFC 129 and the most recent fight against Pablo Garza at UFC 154 in Montreal, Canada. It’s 100% certain that Hominick doesn’t want to compete professionally anymore, and wants to focus on family life now. Although he clearly expressed that he still wants to be involved with the sport in one way or another, but just not in the UFC anymore.