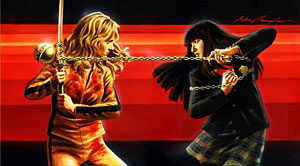 There’s long been speculation that Quentin Tarantino would return to the Kill Bill films with a Vol. 3. The premise of such a film would involve The Bride being the object of revenge. The vengeance seeker? That would be the grown daughter of Vernita Green (Vivica A. Fox), who tried to kill The Bride. Being 10 years after Kill Bill Vol. 2, The Bride’s daughter would also have been a part of the story.

I’m not too disappointed to report, being a total non-fan of these movies, that Kill Bill Vol. 3 probably won’t ever see the light of day. At the Toronto premiere of Django Unchained, Tarantino was asked about the possibility of Kill Bill Vol. 3, to which he replied,

“I don’t know if there’s ever going to be a Kill Bill Vol. 3. We’ll see, probably not though.”

Too bad that Tarantino’s statement could mean two things: The film will hopefully never happen or that it’s a clandestine operation.

Would you like to see a third installation to the Kill Bill films? Leave a comment down below.