Boxing: Manny Pacquiao Goes To Sleep In The 6th Round [VIDEO] 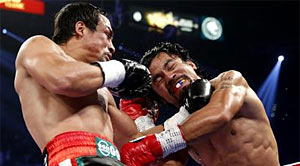 Last night was an all out slug fest between former WBO Welterweight Champion, Manny Pacquiao, and Juan Manuel Márquez at the MGM Grand in Las Vegas, Nevada.

This was the fourth time the fighters met inside the ring, which was in a non-title bout at welterweight placing Pac-Man in his first consecutive loss by a clean right hook to the jaw, knocking him out cold in the last few seconds of the 6th round by Márquez.

According to boxing analysts, the punch that sent a shock wave into the crowd, which also put Pac-Man’s wife in tears could very well go down as the fight of the year, as well be compared to the rivalry between Sugar Ray Robinson and Jake LaMotta in the ’40s. The 39 year old Mexican finally got his revenge after losing numerous times by decision to Pac-Man, granting him the WBO “Champion of the Decade” belt.

If you happen to miss this epic fight last night, you can watch the final 2 minutes of the round and catch the knockout by Márquez in the video right above.