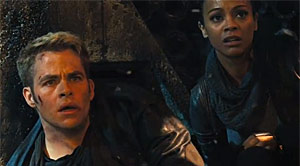 It’s finally here, at least the announcement trailer is. The sequel to J.J. Abrams’ Roddenberry reboot of Star Trek. Earlier today, Trekkies (or Trekkers, if you prefer) nearly wet themselves while the rest of us let loose a barbaric “Hell, yeah!” when the first trailer for Star Trek Into Darkness made the rounds.

What can be gathered from the trailer is that Earth is under attack by an unknown villain. Note that IMDB lists the villain, played by Benedict Cumberbatch, as “Khan (rumored).” Kind of cool, but I’m not sure if Cuberbatch will be able to rival Ricardo Montalban’s performance. Given that Abrams’ first Star Trek film took us way back to Kirk’s entry into the Federation and Shatner’s Kirk was an Admiral in The Wrath of Khan, there’s an obvious time discrepancy here. So, instead of Khan having it out for Kirk, he’s after the planet. Of course I understand that Abrams can do pretty much anything he wants with the franchise since he created an alternate reality with the time-traveling Romulan, Nero.

The trailer also reveals an incredibly hot blonde character. The actress’ name is Alice Eve, but her character name is currently unlisted on IMDB.

Like everything else in Hollywood these days, Star Trek Into Darkness looks decidedly darker than most things in the franchise. Then again, “darkness” is part of the movie’s title.

Have a look at the trailer and bitch about it or praise it in the comments section below.