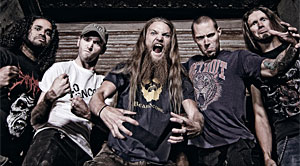 Agoura Hills, California – December 5, 2012 – Detroit, Michigan’s Battlecross, one of 2012’s break-out metal acts, will continue their live campaign in support of their debut full-length, Pursuit of Honor, in 2013. The first leg of the tour, which also includes support from Demon Hunter and All Shall Perish, will begin on February 2 in Ft. Lauderdale, Florida, and runs through February 16.

The second leg of the tour will be announced shortly.

Confirmed shows can be seen below, along with Battlecross’ December headlining tour with Metal Blade Records label mates, Abiotic.

“Wow! So stoked to hit the road with all these great bands – In Flames, Demon Hunter, and All Shall Perish. Last year was good to us and looks like next year is even better for Battlecross. This will be a nice break from working on new material and we can’t wait to see some new and old faces! Once again very humbled and honored to be a part of a great tour! See you all soon!”

Battlecross recently celebrated 52 straight weeks with the debut of “Man of Stone” at Number 5 on the SiriusXM Liquid Metal Charts, following “Breaking You” and their first single “Push Pull Destroy,” which spent five weeks at Number 1. The channel also premiered the band’s studio version of Pantera’s “Hostile” that thrashed audiences on this summer’s Trespass America Festival. The single for “Hostile” is now available on iTunes. The band’s debut album, Pursuit of Honor, is available now. Listen and order at www.metalblade.com.

Battlecross – Another Year Another Tour