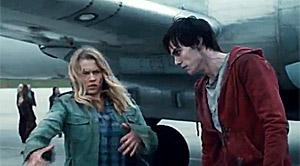 As much as I think zombie-themed films are getting so overrated lately, I figure we might need a stop to it after the release of World War Z, just to allow filmmakers to come up with clever new ideas.

However, I’m still getting the feeling that Warm Bodies might just be another great original zombie film that will surprise my expectation again, like Dead Snow did a while back. Sure, there have been plenty of great ones since, but also crap fests like some of the sequels in the Resident Evil franchise, unfortunately. Maybe, I also feel it’s time for me to sit back and enjoy something that has charm with not all focus on gore and scare. Something you can finally have a good laugh with the presence of your girlfriend, you know, who completely avoids watching The Walking Dead with you.

Now, since the first trailer was a success according to my taste, and that I’m looking to see something a little different with the zombie-theme. This new trailer for Warm Bodies released by Summit Entertainment is definitely still attention grabbing, even tho it’s just a tighter version than the first trailer.

Check it out, and drop us a comment below if you approve or dislike it.