Will Texas Chainsaw 3D Be Scary As The 1974 Original? [VIDEO] 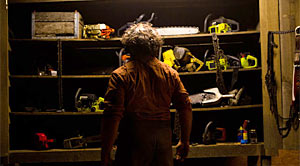 So far we have seen plenty of clips from the new film, the seventh one in the franchise to be exact, and it looks to deliver the same scare as the original did, but presented in glorious 3-D. That means I’m expecting all the 3-D gimmicks such as, in your face chainsaw scenes, flying body parts and enough blood splatter to fill the theater floor. Although I’m still skeptical about the new mask for Leatherface, as I’m sure some of you are as well, I still have high hope for the movie because this first TV spot for Texas Chainsaw 3D looks bloody promising, including another new trailer released by Lionsgate today.

Check ‘Em Out! And let us know if you think Texas Chainsaw 3D will be scary as the original based on these two new teasers.