Man Of Steel May Recognize The Justice League 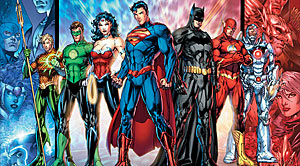 Whether or not the decision to green light the Justice League film was based on the success of The Avengers, it’s coming in 2015. Right now, however, there’s tons of speculation of which Superman will appear in the film. Like so many Internet minds are saying, it doesn’t make sense to reboot the Superman franchise with Zack Snyder’s Man of Steel and then use another version of Superman for the Justice League.

“I don’t know how Justice League is going to be handled. Honestly, I don’t. But The Man of Steel exists, and Superman is in it. I don’t know how you’d move forward without acknowledging that.”

He also answered a follow-up question with the following:

“I can’t really say anything to that, because that’s a big spoiler. I will say, yeah, they trust me to keep them on course.”

What do you think? Should Snyder’s Man of Steel be in the Justice League? If not, can you imagine The Avengers without Robert Downey, Jr. in it? Yeah, didn’t think so. Post an argument below.

Man Of Steel May Recognize The Justice League