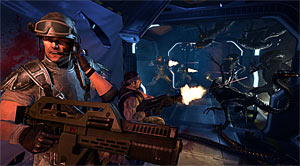 Happy Thanksgiving folks! We hope you had an enjoyable time with your family this evening over a bloody turkey dinner, if you happen to be related to Eli Roth, or be as crazy as him. Remember his fake trailer for Grindhouse?

Anyways with that part out of the way, I’d like to introduce you to a new trailer that Gearbox Software released for Aliens: Colonial Marines, which features the all-new multiplayer “Survivor” mode. A co-op campaign that challenges four-players to complete objectives, and face a wave of aliens. It may sound simple enough, but once you’re the last man standing will you be able to “fight the fear” of being alone against them?

That’s pretty much what this trailer promotes for Aliens: Colonial Marines, which was originally scheduled for 2012, but will now be releasing on February 12, 2013 for Xbox 360, PlayStation 3 and PC.

Check it out, and drop us a comment or two below about the trailer.