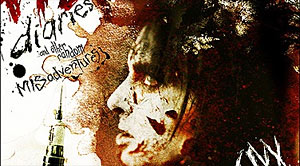 Nikki Sixx just posted on Facebook a comment that he Tweeted earlier today (imagine reading that sentence 50 years ago).

[sic] From my @NikkiSixx twitter account earlier..
Ive been getting asked this a lot lately…The answer is: Yes,”The Heroin Diaries” book is being turned into a broadway play.

More news to follow in the next few months….Were getting pretty far down the road…We hope for a late 2013 or early 2014 for it to open…

If you’re unfamiliar with what The Heroin Diaries is, it’s the published version of Nikki Sixx’ diaries, circa 1986. As the title of the book implies, it’s about Sixx’ legendary drug use, predominately heroin, in and around the time writing, recording, and touring the Girls, Girls, Girls album. It’s an epic read, and it’s a beautiful book (my hardcover version has glossy pages). Whether you’re a metal fan (any genre) or have problems with addiction, you owe it to yourself to read The Heroin Diaries.

How The Heroin Diaries will be adapted for the stage baffles me, but there’s no doubt in my mind that it will be an amazing play.