First Official Trailer For World War Z Is Here – Check it Out! [VIDEO] 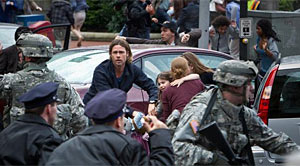 Zombies, zombies, zombies and a pack load more of zombies is what you get in the first official trailer for Warld War Z that is based on the literature work by Max Brooks. The teaser preview that was released earlier this week gave us a good 30 second look at the scale of the zombie apocalypse that takes place in the Warld War Z film, and you really feel the immensity of it in this full trailer with Hollywood’s finest special effects including Brad Pitt who can pretty much pull off any role for any movie nowadays. I never had the chance to read the book, but I sure hope this meets the expectation of fans who did such as, Matt Heafy from Trivium, who had the pleasure of chatting with us in a video interview about his zombie survival tips, inspired by World War Z.

The film is directed by Marc Forster, which is currently in post-production, and is slated for theaters on June 21st, 2013. Expect to see lots of shots of zombies including stars Brad Pitt, Mireille Enos, Matthew Fox, and James Badge.