Uncharted: Fight For Fortune Sequel Rumor Could Be False 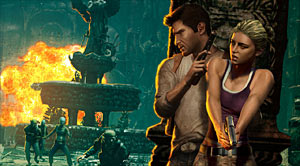 Rumors started to spread like wildfire when Gamespot tweeted an update leading to details about a possible new sequel in the Uncharted series, titled Fight For Fortune for the PlayStation 3. The tweet happened to be re-tweeted by Sony executive Shuhei Yoshida, giving credence to Gamespot’s speculation.

It now appears that the rumor still remains true, but not as a third-person shooter for the PS3. Thanks to “Videtonator,” a member of the message board at NeoGAF, spotted that Fight For Fortune has been rated in Brazil as a PlayStation Vita game, with the genre being classified as a “casino/card” game.

This report isn’t 100% confirmed yet, since it appears that Naughty Dog isn’t developing Fight For Fortune, but a small studio outside of Sony’s in-house development team called One Loop Games is. This tidbit also reiterates the fact that the game could very well be a spin-off in the franchise and not another sequel.