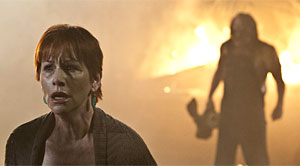 Victor Crowley (Kane Hodder) returns once again to Adam Green’s swamps in Hatchet III, and we have the first official stills from the movie, released by Dark Sky Films.

Hatchet III will pick up the story from where Hatchet II left off. Danielle Harris will reprise her role as Marybeth Dunstan, and newer stars are along for the ride as well: Caroline Williams (Texas Chainsaw Massacre 2), Derek Mears (Friday the 13th), Sean Whalen (The People Under the Stairs), and others.

BJ McDonnell directed the Adam Green-written/produced Hatchet III. The film is expected to be released next year, as it stands in post-production at the moment.

A year after the events of Hatchet II, Marybeth Dunstan has sheltered herself from the world and is living in Honey Island Swamp to stop Victor Crowley from coming back and killing more tourists.