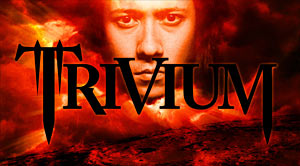 We at Yell! Magazine have now interviewed all the current members of Trivium – all within a year’s time. At Heavy MTL 2011, we spoke to Nick Augusto and Corey Beaulieu and last fall we spoke with Paolo Gregoletto on the band’s tour bus. So, we had all the bases covered as far as In Waves was concerned, which left us free to have an interview free of so many of the ad nauseam questions that typically get asked.

So, what did we talk about? Girls, of course! Actually, not at all. What didn’t make the cut was stuff about each band member’s heritage, foodie stuff, and beer stuff. Heafy is a pretty big foodie, so much so that he keeps a blog, kiichichaos. And, as so many of the other bands mentioned to us at Heavy MTL, Heafy also commented on the outstanding catering at the event.

The material that you will get to hear and see in the video includes stuff about metal as a lifestyle, Heafy’s top 5-ish horror films, zombie survival tips, Randy Blythe opinions, and more.