Rise Of The Zombies Premieres Tonight On SyFy [VIDEO] 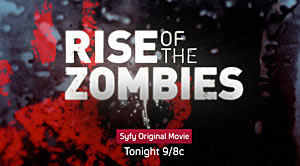 At SyFy, Halloween kick starts tonight at 9:00 p.m. with the premiere of the zombie post-apocalypse horror, Rise Of The Zombies, directed by Nick Lyon (Zombie Apocalypse, Species: The Awakening).

As part of a continuous run of B-movie originals on the network, this, my friends, is a bloody treat not to miss, if you plan on getting infected on the couch tonight. Apparently, the production value is surprisingly good based on a review, but nothing as refined as the The Walking Dead TV series on AMC. (If you’re following The Walking Dead, make sure to check out our weekly review.) Like, can anyone really outwork the zombie makeup effects done by Gregory Nicotero for TWD nowadays? Well, maybe Tom Savini, as he plans to bring us the new wave of zombies in his upcoming remake, Children Shouldn’t Play With Dead Things. But other than these two artists, I wouldn’t have my expectations set too high for Rise Of The Zombies, to say the least.

If you still don’t have any interest in watching Rise Of The Zombies after checking out the trailer above. You may also want to dip into our list of Halloween horror movies, just for some last minute guidance.

Rise of the Zombies Story

Survivors of a zombie plague escape their island refuge (Alcatraz) when it’s overrun and risk the outside world to find a scientist who is rumored to have found a cure for the disease.

Related Items: Rise Of The ZombiesSyFyZombies