Top 10 Vampires Who Could Kick The Sparkles Off Edward’s Ass! 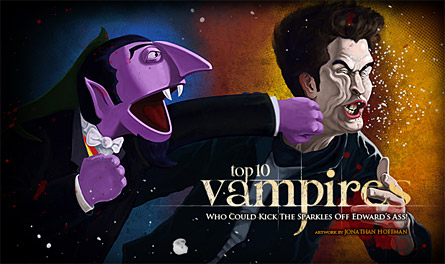 Or: Because A Top 100 Would Have Been Too Long

I fucking hate Twilight with the burning intensity of a thousand Indian burns. I hate the books, I hate the movies, I hate what it’s done to the perception of vampires by the general public. I hate the fans and I hate the funny feelings my fictional girlfriend gets in her equally fictional and possibly inflatable nether regions whenever Robert Pattinson stares blankly at something off in the distance, which he does with alarming frequency. I don’t know what the hell he’s staring at, but clearly its brightness has burned out whatever passed for cognitive reasoning in that oddly misshapen forehead of his. 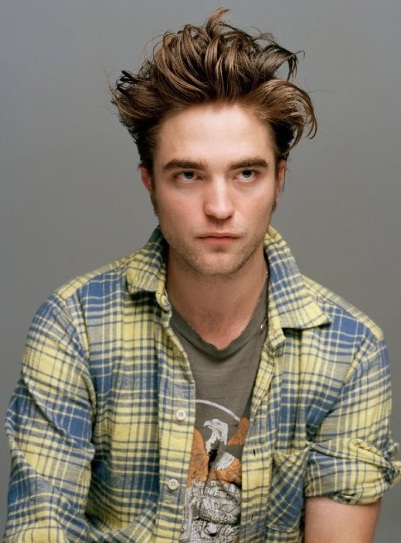 Therefore, in “honor” of the new Twilight movie opening this weekend whose title I can’t be bothered to imprint on my short-term memory for fear it will displace the memory of my last bowel movement, here is Yell! Magazine’s Top 10 List Of Vampires Who Could Kick Edward’s Cullen’s Sparkly Ass! My mother wanted a spot on the list, but I told her she had to get bitten by a vampire first in order to qualify. She really loathes that pointy-haired bastard. Undaunted, she immediately purchased a ticket to Transylvania and promised to return swiftly with a brand new set of pointy teeth. Thanks, Travelocity! 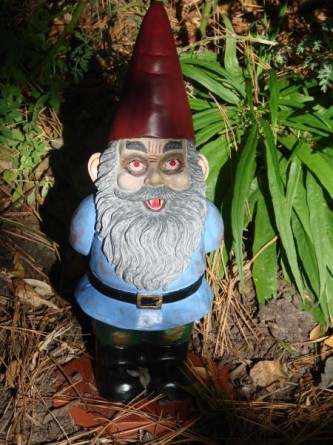 He’ll enforce the guarantee… and suck your blood out through your ankles!

While we await her return, let’s run down the list of Vamps most likely to stab, beat, punch, kick, decapitate, defenestrate, and tell Edward Cullen to get a fucking haircut. These are the Vamps that snack on nubile young women instead of creepily watching them sleep and passing the act off as romantic. They’ll sneak into your bed at night, use your pulsing neck vein as a Slurpee straw and would never dream of waiting until marriage before ravishing you like a ruthless warlord running off to war with a massive, throbbing erection knocking down trees left and right… [Editor’s note: For the sake of expediency, we’ve edited out the rest of TheMatt’s rant, which may or may not have included references to Marie Antoinette, Viking seamen and/or semen, quite frankly we’re not sure which, an insane number of virgins being deflowered, and diaphragmatic war cries.]

Not even a recent remake could tarnish the aura of cool surrounding Chris Sarandon’s 1985 performance as smooth-as-silk vampire and neighbor from hell Jerry Dandrige. He’s smart, sophisticated, knows all the rules of the vampire game like the back of his hand, and lures young women in order to have his way with them and subsequently drink their blood. Screw nauseating lines like, “You’re like my own personal brand of heroin” and, “And so the lion fell in love with the lamb.” Jerry is all about unbridled sex appeal and touchy-feely dancing in bad ’80s nightclubs. 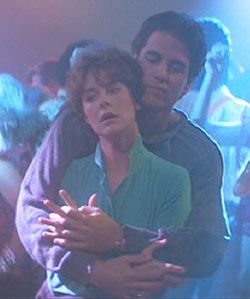 Why he could kick Edward’s ass: Well, he’s been hiding his vampirism for 1,000 years with great success, while Edward might as well be wearing a sign that says, “In between bouts of meaningless staring I like to drink blood.” So while the villagers with torches and pitchforks are burning Edward at the stake, Jerry is sipping martinis back at his place. Plus, Jerry would so totally steal Bella away from Edward in two seconds with his perfect ’80s hair and sheer, irresistible Chris Sarandon-ness. 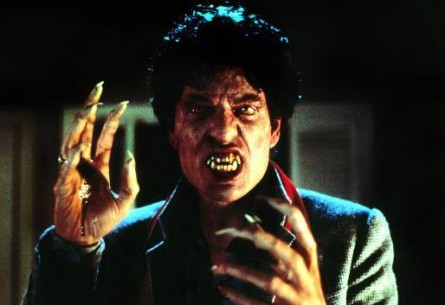 My ongoing love affair with Kate Beckinsale (Read: ongoing court battle regarding a growing pile of restraining orders, which started innocently enough with “100 feet at all times” and progressed to “not on the same planet”) is well established. I have a mild infatuation! There’s no need to call the cops every time you find me mowing your lawn or poking through your trash for discarded… But, I digress! How can I not include her on this list and thus cement my everlasting love for her?

Also, I can put an X next to “gratuitous cheesecake” on my checklist for this article.

Why she could kick Edward’s ass: Selene, the Frederick’s Of Hollywood-wearing, skintight leather-clad (not that we’re complaining) Death Dealer and heroine of the Underworld franchise is a stratospheric leap ahead of Edward Cullen in terms of body count alone. She takes out werewolves with alarming regularity, meaning Team Jacob would be in mourning quite fast, she has no compunctions against taking out fellow vampires, which means Team Edward’s mascot would find himself filled with enough pieces of silver to make Judas call foul. Plus, she’s heavily armed at all times and, post Underworld 2, can step into sunlight without looking like a De Beers diamond with a light bulb stuck up its ass. 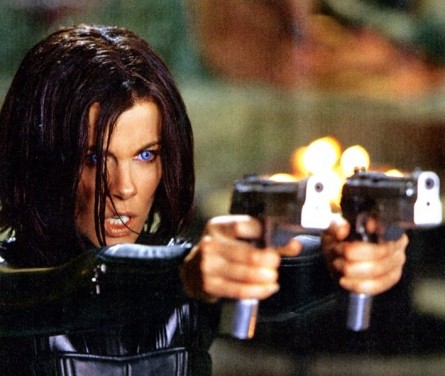 How sad is it when a 10-year-old girl can kick your ass? It’s pretty sad, actually. I’m still in therapy from that time little Lindy hit me in the face during dodgeball practice… last week. She’s a mean little bitch. I’m glad I spiked that thing right back in her curly-haired, freckled, cuddly little retainer-wearing face! Anyway, here’s an impossibly young Kirsten Dunst in Interview with the Vampire, playing the eternally youthful Claudia, the child-like vampire with a mean streak. Her youthful appearance is her greatest weapon, allowing her to take on victims three times her size by virtue of her apparent innocence. 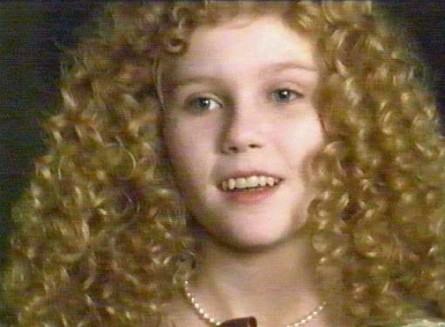 “I want to suck your blood!” Awww, she’s adorable! Honey, slice your jugular open and give the poor thing some blood!

Why she could kick Edward’s ass: Pattinson’s pasty, vanilla physique looks like the last heavy thing he tried to lift with his muscles was a particularly deep, introspective sigh concerning the depth of his navel. Claudia spends her nights luring men into darkened alleyways and beating them into submission. Edward’s probably spent some time luring strange men into alleyways himself, but I doubt it was with the intent of slaughtering them. Advantage: 10-year-old girl.

No.7 The Lost Boys

The Lost Boys holds the distinction of being the first vampire movie I ever saw where the vamps simply could not care less about staying under the radar. The titular group flaunts their powers, ruling over a small town’s boardwalk with impunity and seemingly uncaring about the risk of attracting fellows like Blade. Unlike the Cullen boys, they don’t spend their time playing vampire-powered baseball. 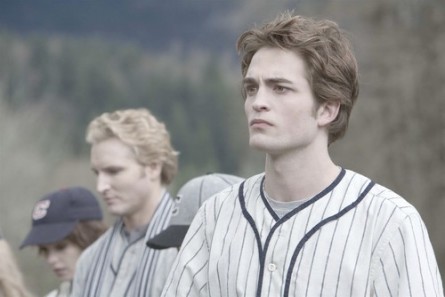 What is this “physical activity” you speak of?

Nope, the Lost Boys would rather hunt for prey, ravage innocent women and add to their ranks by drinking the blood of Corey Haim. (Yeesh, don’t they know where he’s been?!)

Why they could kick Edward’s ass: Not only could the Boys beat Edward like a rented mule, but they could easily take on the entire Cullen clan. On their lunch break. In between serious bouts of looking totally badass in that uniquely ’80s way. What really puts the gang over the top? Their secret weapon, of course! Three words: Jack. Fucking. Bauer. Nuff’ said. 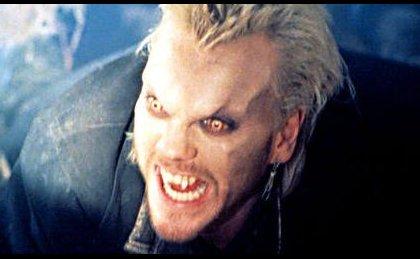 Damn it! I have to stop Edward from setting off a nuclear bomb, damn it! Damn it!

If there’s anything more frightening than a vampire, it’s a vampire with a plan. Most vamps are content with lurking in caves and other various lairs and occasionally going out for a light snack. Marlow, the main heavy in 30 Days Of Night, is by far the most pro-active vampire I’ve ever encountered. Not only does he schlept his ass all the way over to Alaska, making sure to bring his entire clan along, but he checks the calendar first to make sure he’ll have a month-long period of uninterrupted darkness to play in. 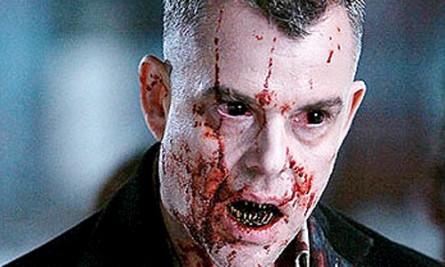 Now here’s a man with a plan! And quite possibly tooth decay.

Why he could kick Edward’s ass: Well, for one thing, he’s got horrible table manners. Edward wouldn’t want to get within 50 feet of Marlow for fear of getting any of that silly blood stuff all over him. What kind of vampire drinks blood with such reckless abandon anyway? Plus, Edward’s idea of a plan is spending five frakking movies convincing a girl to move in with him so he can possibly, maybe, but only if she really feels like it and you don’t think it’s too yucky, drink her blood. Dude, Kristen Stewart looks like she’s barely aware of her surroundings, I doubt she’ll even feel a little prick. And by that, I mean you.