Here Comes The Boom (2012) Review: Not To Be Confused With Here Comes Honey Boo Boo 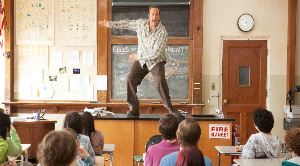 Kevin James’ foil is the school’s absent-minded music teacher, Marty Strebb, played by Henry Winkler. It’s clear that he’s written out to be a sympathetic, compassionate elderly figure who’s fond of the power of music, but it’s so ham-handed that he comes across as a ditzy, ineffectual klutz who bumbles through the movie, looking like an Alzheimer patient given a heavy dose of LSD.

And this is where the movie suffers the most. Whenever it tries to drive home its themes, it does so with the subtlety of a serial bomber at a Pottery Barn. It’s jarring, and is always accompanied by an affected score that just kind of blasts you with emotion like you’re flipping on a switch.

When the characters prattle on about the power of music, you’ll wonder if you’re still watching the same movie, because like 10 minutes ago, Kevin James threw up all over Jason Mayhem Miller’s face. Then, when he gains his drive to teach again, and inspires the one requisite recluse who sits on the periphery of the class, you can’t help but think that this same teacher was victim to a one-hit KO in a pretty well-timed bit of slapstick humor.

However, ham-handed delivery aside, it’s still a movie that manages to entertain. Though you’ll find it hard to believe that you can just sign up for an MMA tournament without even a week’s practice, the movie saves itself by giving Kevin James no reason to win. He’s pretty much just a funny fat guy who’s trying to make some quick cash, and so his plan is to just lose a bunch of mixed martial arts matches and simply get compensated for competing.

You gotta fight for your right to lose.

Thing is, depending on who you are, it’ll be pretty much a toss up as to whether you’ll be laughing at the movie or with it. Some jokes are pretty shameless, as is its employment of Bas Rutten playing a dangerous, good-natured foreigner, who’s wisely made out to be not too foreign. Regardless, it manages to land a couple good gags as well.

There are a lot of things in Here Comes the Boom that’ll fade away into obscurity in a couple months, but there’s a lot that you’ll actually want to remember as well. Whether you’re laughing with a movie or at a movie, you’re still laughing, right? In a lot of respects, Here Comes the Boom is actually so bad, it’s good. Kevin James knows exactly what he’s making here and holds no pretense about it; it’s an underdog story with some UFC cameos, that happens to star Bas Rutten. If that’s not worth a night out at the movies, I don’t know what is.