UFC 153: Silva Vs. Bonnar – Late Predictions But Absolutely Spot On! 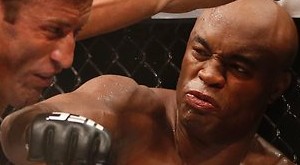 Before everyone starts to put the bull’s-eye on Bonnar’s forehead, let us look at what he could do to steer his way to victory. I don’t necessarily believe in the size advantage that much however Bonnar is bulkier and must throw his weight around Silva and not be shy to get in his face from the get go. Bonnar is insanely durable and has never been finished but his current adversary is nothing short of spectacular and can change the course of the sport in one moment. Bonnar could adopt the same plan as Chael Sonnen did in his first fight against the current Middleweight Champion by rushing out the gate and getting into a striking war before taking Silva down. Although this plan did not really work the second time for Sonnen, Bonnar simply needs to go in there, fight his fight, and not be intimidated by Silva (easier said than done). Silva needs to do what he always does: put on an exciting fight and put his spectacular skills on display (despite a couple of those forgetful performances a couple of years back). I will take Silva for this one but we should expect an entertaining and pivotal main event in which Bonnar could definitely surprise a few people.

Herman’s best bet would be to keep this fight standing for as long as possible and try not to be caught in Nogueira’s deadly guard or ground game. However this strikes a few interesting points; Nogueira is no slouch on his feet as we all remember him knocking out Brendan Schaub in Brazil. We also remember Big Nog’s last fight, where he rocked Mir but got submitted on the ground by the most grotesque arm-break in recent memory. So these are interesting variables to say the least. Nog seems to want to put on a show for his home crowd and won’t have any problem keeping it standing but he should mix it up as well. There is also the factor of redemption in which Nog may want to submit Herman for personal and history’s sake. Herman should rush Nog like a wild beast and make him uncomfortable right away.

This one is intensely tough to pick a winner. Silva seems like one of MMA’s hottest prospects but have we seen enough of his game to say it is complete? Fitch is a world-class fighter who’s ugly but rugged style forces him to smother his opposition and I feel like he will go back to his bread and butter by using his heavy-wrestling style to defeat Silva. It is obvious where Silva wants to keep this fight and would want to do exactly what Jonny Hendricks did to Fitch in his last fight. We must not forget that Silva finished Charlie Brenneman, another solid welterweight with a wrestling-base by submission in his last fight. I am definitely one who believes in Silva’s oncoming train but considering he has not faced a seasoned veteran like Fitch yet, that could be the difference. I cannot see Fitch dropping two straight and I think he will expose Silva; but I wouldn’t be surprised or rule out a Silva knock out either.

We did not see a whole lot of action in their first fight until the eye poke but Prado should not be overlooked; he has some heavy punching power and is undefeated after all. Despite Davis looking decent in his losing effort to Rashad Evans, I feel as if that fight taught the young prospect more aspects of the sport and how he could improve his game. I do not feel like Davis should be intimidated to trade punches with Prado but he should definitely use his superior wrestling to defeat the Brazilian. All’s fair in a rematch and their first fight could play as a psychological factor for both men. If Davis does not get sidetracked by the home crowd, he should steer his way to a decision victory.

This fight could either be an unforgettable war or a short, action-packed affair. Billed as “the guy that nobody wants to fight”, Teixeira’s appeal in the Light Heavyweight division is getting stronger but to win over fans, he needs to emulate what Jon Jones did early in his UFC career and dominate his counterparts one at a time. Maldonado does have a great chance to win this fight if he is not scared to stand and bang with his fellow Brazilian. Both fighters will surely please their country and hopefully shed some light on a division that seems to be thinning out with title challengers. I do not see anything but strikes in this fight and both men have very durable chins.

In all honesty, it wouldn’t be harsh to say Maia is a one-dimensional fighter but we must keep in mind he is improving. Although his ever-improving striking came up short against Chris Weidman and Mark Munoz, it showed that Maia can be comfortable on his feet and did not look like the same guy who was on the receiving end of Nate Marquardt’s fist. This is a great stylistic matchup that may in fact cancel out the styles. Story could benefit from the clinch game and dirty boxing, not to mention his wrestling but Maia’s Brazilian Jiu-Jitsu is as top tier as they come. A stand-up would be beneficial for both fighters and I do think Maia will cruise his way to a decision victory but he has to mix things up later on in the fight.