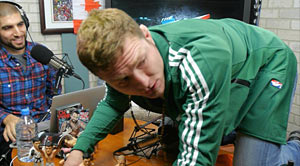 In one of the most bizarre and unfortunate interview segments in the history of mixed martial arts, Jason “Mayhem” Miller served as a guest on Monday’s edition of Ariel Helwani’s The MMA Hour. Miller was scheduled to be a guest for an hour but things took an unfortunate turn.

Promoting the new MMA-themed movie titled Here Comes The Boom (starring Kevin James), Miller decided to act in character as the role he plays in the movie; a man named “Lucky Patrick”.

After acting as the movie’s character for the opening minutes, Helwani tried to get Miller to answer some basic questions to see where he was at in his life and he asked if he could talk to Mayhem. Miller kept on insisting Mayhem was in the woods and he would have to call him or arrange an interview with him. Whether this was all a hoax and Miller was in character reminiscent of Andy Kaufman and Joaquin Phoenix on The David Letterman Show, it was a disturbing and relentlessly annoying scene. Miller proceeded to throw Helwani’s action figures and memorabilia across the room.

The most interesting aspect on the interview was around the five-minute mark when Miller expressed his sadness that he worked all of his life to get to the UFC and now he’s out. He also mentioned “the Twitter thing” which is an argument he had with Dana White a couple of days prior to his arrest for vandalizing a church. For one short moment, the audience witnessed a genuine representation of Mayhem Miller but it lasted less than fifteen seconds. Towards the end of the interview, which lasted over ten minutes despite being scheduled for an hour, Miller started to become infuriated with Helwani calling him Mayhem and started to swear towards the host. After Helwani tried to reconcile and tell Mayhem they had been through a lot together, Mayhem basically told Helwani to continue the interview alone and that he was leaving.

Miller seemed very erratic and despite his recent lack of luck as of late, this was easily his most bizarre and unusual appearance ever. It strikes a question of where fighters are supposed to go when they are released from the UFC. The obvious answer would be for them to find fights elsewhere for other promotions but considering the age of some athletes, some simply have no alternatives after fighting. Some of them open gyms or teach seminars; some of them open businesses away from the sport; some of them enjoy retirement and have made enough money to support their families; some of them just disappear completely. Given the circumstances of Miller’s last few UFC outings and instances with the law, Miller is not a crossroads as a fighter or an athlete but rather as a man. Some of those who watched the video would suggest that Miller was under the influence of drugs or was showing vital signs of schizophrenia or depression. Whatever the case may be, Miller should take the time and get some help. If Miller did in fact hoax us all, his jokes and his act were both tasteless to say the least.

Helwani was extremely professional and remained patient between awkward silences, weird outbursts and even insults, which included anti-Semitic remarks. As the show went back on air, Helwani expressed his distain towards the situation and told viewers/listeners that he ran down the street and tried to chase Mayhem, but to no avail. He also said that although he expected Miller to act as the character as “Lucky Patrick”, he said it was frightening and sad. He looked completely distressed at the whole situation and considered Miller as a friend.

Helwani’s response can be seen below: