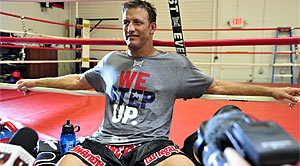 “I’m Going To Give Anderson Hell”

The three-round special attraction is the main event of the UFC 153 Pay-Per-View, which features six fights including a heavyweight showdown between Brazilian icon “Minotauro” Nogueira and Dave Herman and a chance to see two of the most exciting new talents in the UFC – Glover Teixeira and Erick Silva – take on serious tests in Fábio Maldonado and Jon Fitch respectively.

But it is the main event which has got the mixed martial arts world talking. Silva holds Embracing his underdog role, Bonnar has vowed to give the pound-for-pound kingpin “hell” in the Octagon on Saturday night.

Pointing out that he has never been knocked out or submitted, the Las Vegas native said: “I’m going in there to fight him, not to just go in there and think it was cool to share an Octagon with Anderson Silva. I’m going to give everything, fight my heart out, like I did in the fight with Forrest Griffin (in 2005) which changed the sport. That’s what I bring to the cage that Anderson maybe hasn’t seen too many times in his career. I’ve got to give him a fight, I’m got to get him on the back foot, rough him up, and that’s what I’m going to do.

“I’ve been hit by bigger, stronger guys and never been stopped. I mean, look at every fight I’ve ever had – I’ve been hit with lots of big shots but I get up and keep coming. Anderson is so damn good, but no-one has ever walked through me and I will keep coming at him no matter what he throws my way.”

Bonnar can be taken at his word. He is an attack-minded fighter – and seven years’ worth of statistics indicate Bonnar will go after Silva from the opening bell.

According to official stats from FightMetric, the American Psycho has landed more strikes in the Octagon than any light heavyweight in UFC history not named Tito Ortiz or Forrest Griffin, he has the fourth best takedown accuracy in the division at 44.7% and has attempted to finish fights with submissions more than any fighter in 205 pound history with the lone exception of Renato Sobral.

“I get in there any go after it,” the American Psycho said. “I don’t stall, I don’t get stood up (due to inactivity), I go out there any put it on my opponent and I am going to give Anderson Silva hell.

“Very rarely in life does a great opportunity come along for anyone. Getting the biggest shot of my career, when I had sort of retired, is kinda the story of my life. I’ve never really had the best of luck in my career. I’ve not had everything really fall into place for me. But now it really feels like all the stars are aligning just like it did on that magical night for the UFC back in 2005 when I fought Forrest Griffin for the first time.”