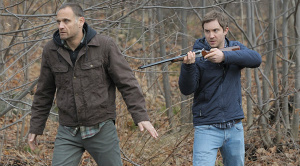 Production for the upcoming season got underway last June, and what we can expect is a resurfaced Aiden who must find a new way to feed, a Nora who has found a way out of limbo, and Josh must contend with a fateful visitor.

I don’t think that spoils too much of what’s to come in Being Human (U.S.) Season 3, and if you’re just getting aboard this supernatural scripted series, it probably leaves you confused. So, if you’re not up-to-date on the series, I’ll brief you on the cliffhanger from last season.

Josh (the werewolf) decided to kill Ray (his maker) with the understanding that doing so would remove the curse from himself and anyone else he has turned. This is important to Josh because he accidentally turned his girlfriend, Nora. Josh asked Sally (the ghost) to possess Ray’s wife and to call Ray in order to lure him out to a remote area to help her with a flat tire. When Ray arrives, Josh marches him into the woods at gunpoint. Needless to say a struggle ensues and Nora shows up with a weapon of her own.

Meanwhile, Aiden (the vampire) sets out to kill Mother so that he and Suren can live happily ever after in the undead. Things don’t work out according to plan. Aiden gets captured and Mother (also Suren’s mother) kills Suren in front of Aiden. When Aiden attacks Mother in a rage he’s easily overpowered and subsequently buried undead (alive).

The final episode of Season 2 ends with Sally communicating via a radio that she’s found a way out of limbo, but she needs the unavailable Josh and Aiden.

Even if the series’ largest audience demographic is female, which either makes this another Buffy or a soap opera, I’m eagerly looking forward to Being Human (U.S.) Season 3.

Check back with Yell! Magazine for updates as they occur.