It’s Only A T-Shirt Presents: Lucio Fulci’s Gates Of Hell Trilogy Poster – Limited To Only 50 Prints 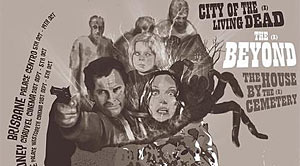 Love or hate his artwork in horror films, Lucio Fulci is considered by many a legendary Italian filmmaker that spent most of his film career emphasising on grotesk imagery such as body decays, and mutilations. Just for that alone we don’t wonder why he is one of the very few that earned the nickname the “Godfather of Gore”, along with Tom Savini.

Which now brings us to the celebration of a recent screening of Lucio Fulci‘s unofficial Gates of Hell trilogy in Australia that consists the following three installments, City of the Living Dead, The Beyond, and The House by the Cemetery. Graciously, It’s Only A T-Shirt is offering this one in a lifetime deal on a slick new Gates of Hell poster (17.7in x 12.6in) which, is limited to only 50 prints onto 135 lb gloss stock, and each print will have a unique number to accompany it.

The Gates Of Hell trilogy poster is going for an asking price of $10US for those who live in Australia, and $15US for the rest of the world. Plus postage is FREE! So you need to act quick because once the prints are gone, they’re gone forever!

Share this post for your chance to win our Fulci print (limited to 50 prints!)! winner picked at random!… http://t.co/id9ywulr