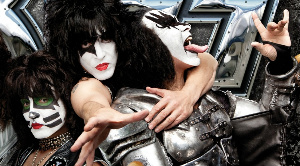 It seems like forever ago that KISS put out the lead track from Monster, “Hell or Hallelujah,” and we’re finally in the home stretch before the album drops on October 9. But that doesn’t mean KISS is finished teasin’ and pleasin’ us yet.

KISS has just made two more tracks available for our listening pleasure: “Long Way Down” and “All for the Love of Rock and Roll.” While both of the new songs are in the ‘70s in terms of general style, neither have the punch that “Hell or Hallelujah” has. That’s not a criticism; it’s an observation. The two new tracks are simply more laid back and chilled out.

Listening to “Long Way Down” I can’t help but to hear influence from Mountain and, dare it be said, Led Zeppelin. We’ve all known for a long time that Eric Singer is an accomplished drummer, but Tommy Thayer really, though he does his job, still sounds like an Ace clone. Paul Stanley sounds great on lead vocals and Gene sounds amazing on backup.

Eric takes lead on the mic on “All for the Love of Rock and Roll,” and WOW! He sounds great. Still, some listeners have said the track is reminiscent of “Mr. Speed,” and I hear it. However, like Peter Criss did on Rock and Roll Over’s “Hard Luck Woman,” there’s a definite Rod Stewart vibe hear. Even the opening and chorus guitar riff sounds like the riff on “Hot Legs.”

I don’t mean to sound negative here, I love these songs. I think they’re awesome and genuine. I just have a predilection toward pointing out what I hear in music. I applaud KISS for taking influence from their older peers, turning it on its ass, and reinventing their sound with it while remaining true to their roots. In the end it’s classic KISS with some new/old blood.

Please let us know what you think of my take and about these new tracks in the comments section below.