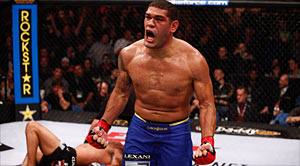 This is one of the most intriguing heavyweight matchups in a while, and it’s a shame it’s not getting enough recognition. Although Antonio Silva has a significant size advantage, both Browne and he are behemoth heavyweights who will deliver an interesting bout to say the least. Silva will want to utilize his size and force Browne into some unconformable positions, but Browne is no slouch either. He has heavy hands that are capable of knocking out some of the better strikers in the division. I feel that Silva will not be shy to trade with him, but he also impose his will and take the fight wherever it needs to go.

The co-main event features a welterweight scrap in which Jake Ellenberger will try to gain back the sizzling form that had him at the heap of the division not too long ago. Jay Hieron returns to the UFC for the first time in seven years after a string of uplifting performances with STRIKEFORCE and Bellator. Both fighters have a good wrestling pedigree, which makes things a lot more interesting; however, I give the advantage to Ellenberger. The Omaha, Nebraska, native will be looking to bounce back from his knockout loss to Martin Kampmann. Viewers should look for a slight change in his game plan, like takedowns and clinches, however, he does love to stand and bang.

John Dodson and newcomer Jussier Formiga will fight to determine the next challenger for Demetrious Johnson’s UFC Flyweight strap. Although Dodson had a great run on The Ultimate Fighter and is vastly improving, Brazil’s Formiga should not be overlooked simply because of his relatively unknown status in North America. His last four victories came via submission and he has fought for such promotions as Shooto and Tachi Palace Fights, boasting a little more experience than his counterpart.

Josh Neer is certainly nowhere near done yet, and despite the need for Edwards to get a big win to revitalize his career with the UFC, Neer will be a little too much for Edwards to handle. Look for Neer to pull off a submission early in the fight.