Left 4 Dead 3 Very Likely To Happen, But Not Anytime Soon 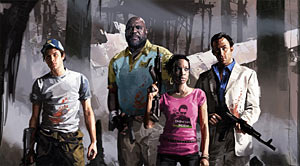 Valve gave birth to the epic zombie FPS Left 4 Dead back in 2008, and according to writer, Chet Faliszek, the franchise has reached over 12 million gamers worldwide. With numbers like that a third installment in the series is a high possibility. In a conversation with VG247, Faliszek mentioned that with the rise of the internet, the rules have changed.

“Telling people a game is great will sell one extra copy. Letting people play the game–Left 4 Dead is a good example–is much better,” he said. “All of our pre-release stuff is designed to just let people play it.”

“We just let the game speak for itself because the Internet has made this thing where you can’t pull the wool over people’s eyes any more,” Faliszek added. “They’re going to know you’re hyping.”

With all that said, Faliszek did also say in another conversation with Eurogamer that Left 4 Dead 3 is likely to happen, but “sometime down the road.” Meaning that you should not hold your breath before they wrap up the Linux version of Left 4 Dead 2 which, is currently in the pipeline.