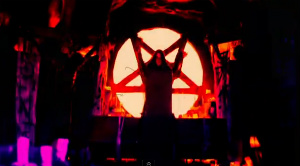 A while ago we brought you news of the new “Witchtripper” track from Down’s forthcoming album/EP, Down IV Part I – The Purple EP. Well, since then the EP has been released and the music video for “Witchtripper” just hit airwaves.

As you’d expect, the video features witches and witchcraft. On the way cool side is the fact that it’s filmed in a way that makes it look like a silent film from the 1930s – only with much better resolution and without the jumping film and grainy images.

It’s a badass video for a killer tune.