40 Years Of Lloyd Kaufman: Interview At The 2012 Montreal ComicCon [VIDEO] 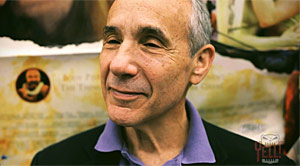 So there I am, standing by the booth occupied by the famous Troma Entertainment at ComicCon, smiling awkwardly at the guy manning it while I wait in line to meet and schedule an interview with a childhood hero, and the man behind the reason for my love of Horror movies, and my obsession with B-movies.

My hands are shaking, I’m giggling psychotically, and I’m trying desperately not to run away and throw up. Fucking nerves. Because you hear all these horror stories, right? About people finally meeting childhood heroes and they turn out to be fucking dicks, dashing the dreams of children and adults everywhere. Is this going to be one of those times? Freaking myself out, rather than calming down at these thoughts, I start to fiddle with my lip ring, because that’s what I do when I’m losing my mind. Sure, we’ve tweeted back and forth a few times, and everyone always says he’s the coolest guy in the world, but tell that to my brain.

And there he is, coming around the table toward me, arm outstretched, talking to some guy in a leather jacket about how leather-guy used to watch his movies when he was young, and how he remembered blah-bitty-blah. I feel an arm touch my shoulder and my hero turns to leather-guy and says, “Wow, you have a great memory,” he pauses, turns to look at me and says, “And you have a great mammary!” And that, folks, is how I calmed the fuck down, laughed my ass off, and scheduled an interview with Lloyd Kaufman. He also threw in a little, “Well, you are a jaguar, aren’t you?” in reference to my name. Basically, I relaxed because Lloyd Kaufman got sleazy with me.

And that is how the mind of a female Troma fan works, dear fiends.

But anyway, to be completely honest with you, Lloyd Kaufman genuinely is the nicest guy in the world. He takes the time to talk to every fan that stops by his booth at conventions, listens to everyone ramble on about how The Toxic Avenger changed their lives and acts as if that’s the first time he’s heard it. He’s a sweetheart, he’s hilarious, and if you’ve read any of his books, you’ll know that he’s pretty close to a genius.

King Hazard and I were also fortunate enough to get front row at Lloyd’s Q&A panel, which was simultaneously a laugh-riot and extensively educational. During the hour or so panel, Lloyd discussed the reasoning behind his decision to release over 250 movies, free of charge, on Troma’s YouTube page, the corruption of big media, and why indie movies often suffer as a consequence, and he even takes a shot at big-name stars who charge outrageous prices for autographs and pictures (Lloyd signs anything and everything free of charge).

This year marks the 40th anniversary of Troma Entertainment, founded in the early ’70s by Lloyd Kaufman and his partner Michael Herz. Celebrate with us here at Yell! Magazine, and the Troma team, by watching the interview video posted above, then heading over to YouTube and checking out some of the great movies Troma has given us over the years. Finally, don’t forget to pick up your own copies of Troma’s classic flicks, and support Kaufman and Herz, the way they have supported us through the years by consistently churning out hilariously raunchy, green-goo-filled movies, that are not only fun to watch, but give all aspiring filmmakers hope that maybe they, too, can create what’s in their fucked-up minds, with little experience, and even less money.

We love you Lloyd, happy Tromaversary!