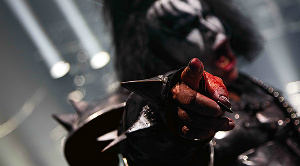 Just three more weeks until October 9, 2012, when KISS‘ Monster becomes available for fans to devour and proclaim to their friends and doubters, “See, KISS is still awesome, relevant, and able to create better music than the glut of crap coming off of radio airwaves today.”

Still, that’s a whole three weeks away and fans have been anticipating KISS’ 20th studio effort for what seems like an eternity. Thankfully KISS has allowed iTunes to give us 90-second previews of all 13 of Monster‘s tracks. It’s true, from what I can hear the album harkens back to classic KISS, but at the same time it feels like a follow-up to Psycho Circus. A couple tracks aren’t sung by Paul Stanley or Gene Simmons, and I’m not feeling particularly offended by Eric Singer’s vocal contribution, but Tommy Thayer’s on “Outta this World” is a little off putting, especially with lyrics like, “I’ll take you out of this world (to the other side) on a midnight rocket (to the morning light).” You’ll understand my point of view if you’re an Ace fan. Plus, there’s a guitar riff, which I’m assuming Thayer also wrote (read: stole) from Mountain’s “Mississippi Queen.”

Visit iTunes to check out the tracks and, if you feel so inclined, pre-order Monster for just $9.99.