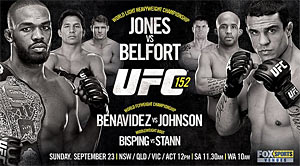 UFC 152 takes place at The Air Canada Centre in Toronto on Saturday, September 22. The main event will be for the UFC Light Heavyweight Championship as Jon Jones defends his title against Brazilian powerhouse Vitor Belfort.

This will be the first time the UFC has showcased a card since the turmoil of a few weeks ago that forced the cancellation of UFC 151. Dan Henderson was supposed to be Jones’ original opponent, but a knee injury forced him out of the bout. Everyone’s favorite gangster from West Linn, Chael Sonnen, stepped up to the plate and accepted to fight Jones on eight days notice, however, the champion decided not to take the fight after consulting with his coach, Greg Jackson, and was blamed by many members of the MMA community (including Dana White) for the cancellation of the entire card.

Belfort was offered the fight after fellow Brazilian and Lyoto Machida strangely decided to opt out of the fight against Jones in Toronto.

I do believe that Vitor Belfort possesses more of a threat to Jon Jones than most would think. If Belfort can find his range and accurately land shots on Jones, it will be a matter of time before his patented left-hook clocks Jones and puts him in a world of trouble. I do not think Belfort wants to take this fight to the ground. Jones’ ground game is the most dangerous and frightening in almost all of MMA. Jones’ lengthily reach and speed will be a big problem for Belfort and I wouldn’t be surprised if Jones finishes Belfort fast in a dominant fashion. In his last five fights, Jones has faced the best competition in the division and he made it look easy. Belfort is naturally a middleweight, which raises a few concerns about his cardio and his endurance. For Jones, that isn’t even a question; the current champion could probably go 10 rounds if he had to.

The first UFC Flyweight Champion will be crowned on Saturday night as tournament finalists Joseph Benavidez and Demetrious Johnson step into the cage, both hoping to claim their first major title. Benavidez is a fast and powerful fighter with an above-average ground game as well. Johnson is no slouch in terms of speed, but could lack the striking power that Benavidez possesses. Johnson fought natural flyweight Ian McCall twice in two hard-fought victories (the first was extremely controversial because of a scoring mistake by the athletic commission). Benavidez sent Yasuhiro Urushitani to the canvas back in March, but that was a while ago. Long layoffs could be dangerous in this sport. Expect these flyweights to throw caution to the wind and give the fans a great and memorable fight, especially with all the heat they’re getting from Michael Bisping for having the co-main event slot (title fights should usually get the top spots, regardless of the weight). I could see this fight going to a decision. Both guys are very tough and durable.

With title implications looming over this fight, Brian Stann vs. Michael Bisping could be the best fight on this card. I do not think the two middleweights want to bring this fight to the ground because they both have the desire to prove their worth in the division amidst many names that are being called out as the next opponent for kingpin Anderson Silva. Stann could throw some bombs early and I don’t think Bisping has the same strength behind his strikes, but I do think Bisping is the more accomplished fighter. Bisping’s endurance should be better than Stann’s the longer this fight goes, although in the past Bisping has had trouble with guys more powerful than him (Wanderlei Silva, Dan Henderson). If Stann does not tire early, he should be able to beat the British fighter. I find it difficult to imagine Stann finishing Bisping, but I don’t think this fight will go to a decision either.

UFC veteran Matt Hamill comes out of retirement to face Canadian Roger Hollett, who makes his promotional debut. Hollett is unbeaten in his last five and Hamill will try to work his way back into contention after suffering a loss to Alexander Gustafsson over a year ago. With a brown-belt in BJJ, Hollett will be confident enough to go to the ground but Hamill is an NCAA Division III wrestler so it will be interesting to see if he challenges Hamill in that aspect. It’s been a long time since Hamill fought, but I’ll take his experience in the game as a big factor in this fight.

This should be a hell of a catchweight fight (originally supposed to take place at featherweight, Oliveira missed weight by four-tenths of a pound earlier yesterday). Oliveira is getting better all around instead of just being a talented submission fighter. When Cub Swanson is on, his stand-up is lethal. He will have to avoid Oliveira’s passes to go to the ground, but I think he can pull it off.