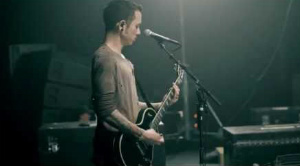 When Trivium released their last album, In Waves, they also brought a special edition DVD to market. The In Waves DVD included a making-of doc, the video for “In Waves,” and eight live studio performances of the songs “In Waves,” “Black,” “Built to Fall,” “Watch the World Burn,” “The Deceived,” “Suffocating Sight,” “Down From the Sky,” and “Ember to Inferno.” Well, now there’s some good news for all the freeloaders out there who didn’t shell out for the CD, MP3s, and especially for the DVD. Trivium has made this special edition In Waves DVD available on YouTube. See, aren’t they totally about the fans? Check out the Trivium YouTube playlist for all eight live studio performances.

I personally think Trivium is one of the best things to happen to metal in a long time. My opinion is borne of the idea that the band has the ability to appeal to both kids (aka, the new generation of metallers) and old men (aka, the OM, or Original Metallers). Plus, we’ve interviewed everyone in Trivium, and they are all some of the friendliest bastards I’ve ever met.