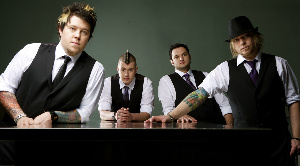 If you like generic rock like Nickelback, or if you’re a 12-year-old boy just discovering the world of music, you’re really going to dig “Psycho” by 12 Stones. You also might be that chick who keeps calling active rock stations requesting “Crazy Bitch” three times a day.

Either way, 12 Stones have just recently released the lyric video for “Psycho,” which is about, according to vocalist Paul McCoy

…that moment of going on stage, and being in the crowd at a concert, that intense exchange of energy between the band and the fan. Rock on the Range this year was an example of that, that crowd was rocket fuel!”

When you’re watching the video, don’t forget to take note of the worst pit ever at the 1:25 mark. Also, we’ve listed the tour dates below the press release.

NEW ORLEANS, LA – Louisiana hard rock outfit, 12 Stones, has teamed up with Noisecreep.com to premiere a lyric video for the band’s latest single, “Psycho.” The track is the third charting Active Rock hit from the quartet’s fourth album, Beneath The Scars, which hit stores in May.

12 Stones is currently in the midst of its massive headlining Beneath The Scars Tour, which continues to make its way across the U.S. and back.

A full list of all confirmed dates can be seen below.

A group that has sold more than 2 million total records to date, this current run is just the tip of the touring iceberg for 12 Stones in support of Beneath The Scars, the band’s fourth studio album and first on the independent record label Executive Music Group. The band plans to continue to tour for the remainder of 2012 and into 2013 behind the release that debuted on the Billboard 200, and was the #1 Billboard Christian Rock album, while also scoring two #1 Christian Rock singles with “Worlds Collide” and “Bulletproof.” The album has also spawned three charting Active Rock hits with “Bulletproof,” “Infected,” and now “Psycho.”