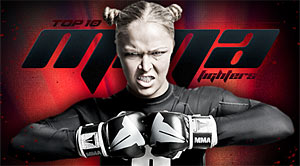 2012 Best MMA Fighters On The Planet

MMA has seen champions come and go, legends reach their peak and fall, and young superstars emerge to take the world by storm.

The UFC is the proving ground to see what a fighter is made of, as the company has the most impressive roster in all of the sport and has its fighters face the toughest competition in each fight. To be a UFC champion, it proves there is something great about that individual simply because there is so much gifted talent on the roster. Although that does not mean athletes outside the promotion are complete rubbish either.

Although there are dozens of extremely talented fighters around the globe, Yell! Magazine has compiled a list of the 10 best fighters on the planet today.

Luke Rockhold has voiced his displeasure with not being able to fight the best in the world because he is in Strikeforce. That does not keep him from delivering solid performances. Although Rockhold could be a surprise entry for this list, he is 10-1 in his MMA career and his lone loss happened in 2007. He has only gone the distance twice and he recently beat Tim Kennedy to retain his Strikeforce Middleweight title. He defends that same title against Lorenz Larkin in Oklahoma on October 3rd.

Sometimes the lower weight-classes are overshadowed by household names that seem more familiar to the casual fan. Dominick Cruz is not yet a household name but he certainly deserves all the credit in the world. His cat-like stances in his standup game are extremely tricky to train for and he has impressive cardio. After avenging the only loss of his career against Urijah Faber at UFC 132, Cruz defeated Demetrious Johnson in an entertaining fight in October of last year. “The Dominator” holds an outstanding record of 19-1 and went 7-1 in the now-defunct WEC.

It is difficult to say that a fighter could be the best in the world after six fights, especially when only four of those fights were at the highest level of competition. Although it is a different story when that same fighter finishes all of her opponents in the first round, via the same destructive armbar. Rousey’s longest fight clocked in at 4:27 against Miesha Tate earlier this year, a fight in which was supposed to be her toughest test. Not only did Rousey nearly rip Miesha’s arm off, but she also defeated accomplished Canadian Sarah Kaufman last month to retain her Strikeforce Bantamweight Championship. A potential fight with Brazilian powerhouse Cristiane “Cyborg” Santos was in the works but plans have stalled.

Gilbert Melendez is easily the best fighter outside the UFC, with 21 victories and 2 losses. He is the current Strikeforce Lightweight Champion and trains alongside Jake Shields and the Diaz brothers over at Cesar Gracie’s Jiu-Jitsu Academy. He has had perhaps the greatest trilogy in MMA alongside former champion Josh Thomson. Melendez is not only a Brazilian jiu-jitsu brown belt but also packs a truckload of power behind his punches and elbows. He faces Pat Healy later this month in Sacramento but a crossover superfight between Melendez and Frankie Edgar is long overdue.

Speaking of the former UFC Lightweight Champion, Frankie Edgar could almost already be considered as one of the sport’s greatest fighters who ever stepped into the cage. (The reason Edgar was picked over current UFC Lightweight Champion Benson Henderson is not only because his two losses to the champion were very controversial but also because his track record is a little more impressive than Bendo’s, with all due respect). Edgar proved he had the biggest heart in MMA in both fights against Gray Maynard and defeated the legend BJ Penn not once but twice. He has been in a whopping six-straight title fights and has won three of those six. His move to featherweight seems to have taken a slight turn as his UFC 153 fight with Jose Aldo in Brazil has been cancelled.