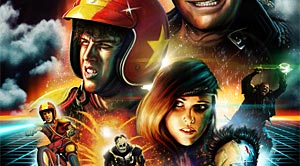 Fantastic news just gushed through our already bloody news gate in regard to a small project titled Turbo Kid. You might remember hearing about this a while ago, but let me refresh that tasty brain of yours.

Do you remember that competition for The ABCs of Death that sought to find the 26th director to helm in a feature-length film? The one presented by Drafthouse Films, with the letter “T” assigned to various independent directors to push a short film beyond the boundaries of hell? It was also the one where the judges of that competition didn’t see eye to eye with the voters, and selected the wrong friggin’ winner in my opinion. No disrespect to Lee Hardcastle, who garnered the first-place win with T is for Toilet, but the one that had my thumbs up, and I mean way up, was for T is for Turbo (aka, Turbo Kid). It came in a measly third. It was a disappointing announcement that day, one that the Montreal filmmakers, RKSS (Roadkill Superstar), likely will never forget.

Luckily, one of the judges on that jury, my finger is pointing to Canadian director Jason Eisener (Hobo with a Shotgun, Treevenge), has been a fan of RKSS since the release of Le bagman, and a fake trailer titled Demonitron: The 6th Dimension. Jason Eisener and Ant Timpson (producer of The ABCs of Death) went on a mission to seek out a deal during the 2012 Fantasia Film Festival to turn the fully written Turbo Kid script from RKSS into a feature-length film.

Now, a month after the close of Fantasia, an announcement was made today that the Turbo Kid project is officially signed with a Montreal-based film production company, EMAfilms, to produce the film along with Ant Timpson and Jason Eisener as executive producer.

Ant Timpson commented that he was:

“…excited to collaborate with Anne-Marie from EMAfilms who ‘gets’ the project. After I saw RKSS’ hilariously gory post-apocalyptic BMX short T FOR TURBO during THE ABCS OF DEATH short film competition, I knew I needed to work with them on expanding it to a feature. TURBO KID is like the ultimate video mix-tape put together by an ’80s movie obsessive after 20 energy drinks.”

“The RKSS crew have been a huge inspiration over the years and it’s a pleasure to help them get their first feature film off the ground. Now the Turbo team is assembled with a full charge and ready to blast awesomeness onto the screen!”

With all this to say, and regardless of the outcome of The ABCs of Death, team RKSS has this chance of a lifetime to bring Turbo Kid to life, and we’re looking forward to seeing the finished product, which may come earlier than expected.