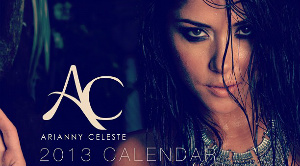 OK, you don’t have to see the cover of the calendar to know that it’s going to be rife with sexy pictures of the beautiful Mexican/Filipino, but, if you need convincing, there it is. Until you get the calendar, however, you can enjoy our gallery of the lovely, if not sometimes violent, Arianny Celeste.

You know, around the Yell! Magazine offices we consider ourselves to be pretty secure men and women, and we certainly don’t condone violence (well, OK, we do, but not the kind Arianny was reportedly involved in earlier this year), but we’d consider it an act of affection if she kicked us in the face and broke our nose. In fact, we’d consider it a testimonial of love if she kicked us in the nards and ruptured our testes. I shouldn’t make light of that, however, as it’s nothing to kid about. I’m referring to Arianny being charged and arrested for a domestic violence incident. The charges were later dropped.

Look for the Arianny Celeste 2013 Calendar later this month. Brittney Palmer also has a 2013 calendar in the works, as are most of the UFC octagon girls.