MMA: Jon “Bones” Jones Finally Opens Up On All The Chaos Surrounding The Cancellation Of UFC 151 [AUDIO] 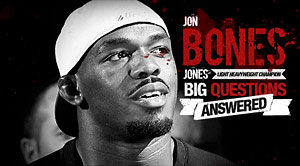 There’s an apparent uproar surrounding the cancellation of UFC 151 among the MMA fans, media outlets, and even inside the UFC organization. Dana White clearly expressed his anger toward the current UFC Light Heavyweight Champion Jon “Bones” Jones in a special media announcement held two weeks ago. Going as far as saying that both he and UFC Co-owner Lorenzo Fertitta are “disgusted” with Jones for turning down the Chael Sonnen replacement fight on eight days notice to save UFC 151, as well as calling his coach Greg Jackson a “f-cking sport killer” for not bringing any sense to Jones.

“I’m very confused by his whole business plan, I don’t give a shit what Greg Jackson thinks. Guy’s a fucking weirdo. Greg Jackson should never be interviewed by anyone ever again, except a psychiatrist.” – Dana White

These are extremely harsh words coming out of the mouth of the UFC president who’s constantly in the media spotlight, but considering the “huge” financial loss in Pay-per-view buys, tickets sales, and losing all the money spent to market UFC 151 on FX, it’s easy to understand the frustration he’s got to deal with. Emotions are bound to burst out of Dana since this is also the first time in UFC history that an event had to be officially canceled.

After that disappointing announcement, Jones still remains the target on the bull’s-eye by all the MMA news outlets that criticized his recent action, and bolster his public perception as the new UFC bad guy. Almost leveling him to the same point to when Tito Ortiz owned that very same label. Although, the fault doesn’t come from the media, they only exploit the situation further, as the young 25-year-old champion has built this reputation on his own for some time with cocky statements like calling himself “the prodigy” of the sport, and also raising doubt on his religious beliefs.

The fans who purchased tickets for the event are pissed off that they had to ask for a refund. Worst part of it all is that the fighters listed in the UFC 151 prelims are suffering the most, and should be furious at him because they don’t have income coming in to support their families. Jones, on the other hand, doesn’t have to worry about income; he already has a mind-blowing salary and recently landed a striking deal with Nike. So, it’s easy to target him right now, but overall, it really puts Jon Jones in the worst spot in his career, and it might leave a permanent scar.

All this to say, I’ve been waiting to hear many answers from Jones to obvious questions ranging from all of the above including his thoughts on Cheal Sonnen. Ariel Helwani over at MMA Fighting has raised most of them in this exclusive first full interview since it was announced that Jones would be fighting Vitor Belfort at UFC 152, which is expected to take place on September 22, 2012 at the Air Canada Centre in Toronto, Ontario, Canada.