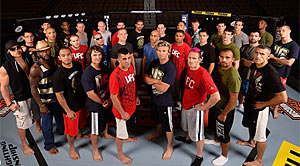 The field of 32 of the most talented unsigned mixed martial artists in the world has been finalized for THE ULTIMATE FIGHTER FRIDAYS which begins Friday, September 14, on FX with a special two-hour premiere airing at 9 PM ET/PT.

Similar to the inaugural season of The Ultimate Fighter on FX, this upcoming season will run for 13 consecutive weeks, airing Friday nights at 10 PM ET/PT. The eventual season winner – who will be crowned at the live finale on Saturday, Dec. 15 on FX, will receive a six-figure contract with the Ultimate Fighting Championship organization.

“Carwin and Nelson are two guys who just can’t stand each other and Roy and I haven’t exactly seen eye to eye either – he’s been a nightmare for me to work with on this show with all his stupid BS,” said UFC president Dana White.

“We feel that the rivalry between these two guys is going to create a season filled with fireworks and high drama, and we already know we can count on Dana White, Lorenzo Fertitta, Craig Borsari and Craig Piligian to bring the highest quality product to UFC fans, so we couldn’t be more pumped about the upcoming season.”

The list of finalists who will now attempt to fight their way on the show was trimmed from more than 60 invited fighters; 29 of the 170 lbs welterweight fighters seeking to cash in on the opportunity of a lifetime are from the United States, two are from Canada while one is Brazilian.

On Sept. 14, the season will kick-off with 16 gripping elimination fights. The winners in the elimination round, or “Fight In,” will become official cast members and earn their way into The Ultimate Fighter house in LasVegas where cameras will document their activity before and after their training and fights. The 16 winners will be drafted into opposing teams of eight by Carwin and eight by Nelson.

Each team will train at the TUF gym and reside in the TUF house together for the duration of theseason. Winners will advance in the tournament until ultimately, one man iscrowned THE ULTIMATE FIGHTER.

Many of today’s most recognizable names in MMA have emerged from the TUF series, including,among many others, Rashad Evans, Kenny Florian, Forrest Griffin and Stephan Bonnar.

So who will be the champion on THE ULTIMATE FIGHTER FRIDAYS on FX?